The aim here is a simple one – help Kirara-chan collect enough stars before the timer runs out to clear the stage – and like many of the best “simple” games her hop ’em up’s actually far more complex and refined than it may appear.

The only way Kirara can collect stars is jump at them, with those athletic bounds coming in two varieties: a standard half-screen bounce and a full monitor-high leap, the strength of her spring controlled by pushing (or not) an upwards direction on the d-pad when pressing the jump button (this is the default setting, the debug menu allows you to map normal/high jumps to the B and A buttons respectively). She can also gain a little extra height by bouncing, Chun-Li style, off either side of the screen too. Whatever she’s up to her movement is always fluid and responsive, every inch of the screen never more than a measured bounce away. 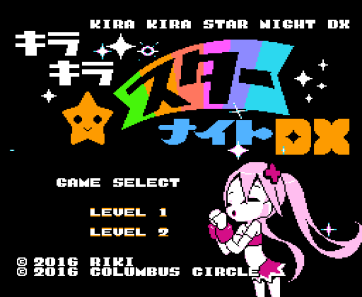 And thank goodness for that because those stars loop and twist in all directions when they’re on the screen as though they’re auditioning for a Galaga reboot rather than fall from the top of the screen in neat rows. These “waves” of sparkly collectibles are pre-set and they tend to linger on screen long enough to get caught rather than zoom on by before you’ve even realised they’ve appeared – you do need to be quick but they’re designed to be something you see and then react to rather than memorise. After a few goes you start to see how a specific jump at the right time will catch them all at the point where they intersect on the screen, or how a hop off the side of the screen can collect several groups at once, a quick grab that’ll cause the next group to spawn a little earlier than they would have otherwise. It’s a satisfying skill, one you can practise and eventually perfect on the standard difficulty level before taking on the more challenging Level 2 with its remixed background palettes and all-new star formations.

Whatever setting you go for you’ll encounter a balanced difficulty curve, Kira Kira Star Night DX introducing new elements at a pace that keeps stages feeling fresh and interesting without putting up a brick wall, and a little practise soon leads to perfect clears (any wave collected without missing a star) and higher scores on earlier stages, and later levels transforming from mad dashes that only just clear the stage to something more controlled comfortable. It’s an enjoyably bouncy experience, especially as there are always far more stars on offer than even the more demanding collection thresholds require – you’ll never find yourself in a miserable situation where missing just one star on a stage’s fourth wave scuppers the entire run. The only thing to watch out for is that there’s no way to pause the action, which seems to be a conspicuous (and possibly deliberate) omission in a game that’s otherwise so consistently well thought out. The good news is though it’s a short experience with just nine pleasantly brief stages per difficulty level, so clearing the whole thing in one go isn’t as unreasonable as ask as it may seem.

The soundtrack accompanying this action has been provided by an eclectic mix of established and new artists. Some of the more famous names include Nobuyuki Shioda (stunning Famicom shmup Recca), Yuriko Keino (numerous legendary Namco titles), Manami Matsumae (classic Capcom), and of course Yuzo Koshiro, who (happily) can’t seem to walk down the street without tripping over someone who wants him to write chiptune music for them. It’s an upbeat and energetic soundtrack, the perfect match to some hoppy star collecting action and if you’d like to listen to the music without turning on your Famicom the soundtrack CD is still available to buy online. 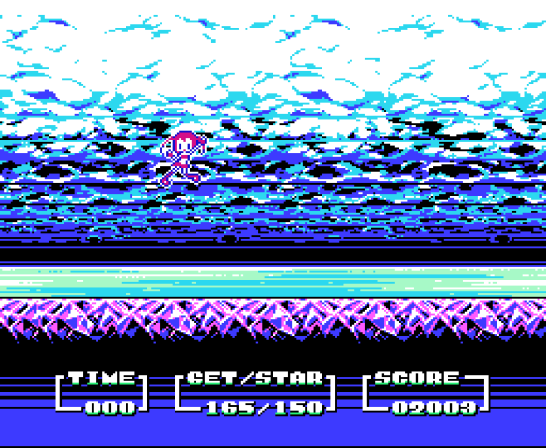 As cute and bubbly as it is Kira Kira Star Night DX is clearly a huge technical achievement too – Kirara’s animation is astonishingly fluid and the backgrounds she confidently strolls through are a riot of colour in static screenshots and only more impressive in motion, smoothly scrolling by and casually showing off multiple layers of parallax scrolling in the process. These details would be stunning enough by themselves, especially as this is all running on the same console that didn’t give Dragon Quest‘s hero a side-facing sprite the first time around – but there’s all those zippy little stars to consider as well. There’s a lot of them whizzing around the screen all the time, and yet no matter how many appear there’s no sprite flickering at all unless you deliberately try to “overload” the screen with stars (by not picking up any of a particularly packed wave’s worth) and even then it’s just the merest hint of a wobble at worst and something you really have to look out for.

This little cart’s an impressive tech demo and genuinely fun game rolled into one, both halves not only excelling in their chosen fields but also complimenting each other beautifully. Simply put, this is a good Famicom game. It’s a good Famicom game now, even though we’ve now seen and done it all a million times before, and it would’ve been a good Famicom game had it released decades ago too, Kira Kira Star Night DX as worthy of anyone’s time as any of the better known action games on the system. There’s even a secret extra character code revealed after clearing the game on Level 2 (clearing the game on Level 1 displays a code to unlock a neat debug menu) whose sprite uses a more simplistic but equally charming style – and she has double jump too, a small change that opens up a whole new way of playing the game just when you thought you’d finished.

A Limited Run release on a NES style cart was available once, although it’s now long sold out and predictably fetches triple-digit prices in any region. Luckily the Japanese original is much cheaper (if apparently just as out of print) – and bar the title logo the text is in entirely in English.

[Just so you know: None of the links to external stores found here or in any other article are affiliate links or ads – they only exist to help point people in the direction of cool stuff]

[Ko-fi supporters read this a week ago! Why not join them – and help me make this place even better too?]