I’ve been looking forward to playing this one, especially after the drastic (and positive) course correction found in Vol. 6: Bonanza Bros. – the Sega Ages 2500 series might have finally found the magical happy spot between the opposing forces of authenticity, modernity, and budget. It’s quite hard to muck up Columns anyway – there are just two gem types to worry about (normal colours and that one “magic” gem) and the rules are short and relatively simple, so making a decent port or remake is surely “just” a case of copying those features over to the new format and then letting Columns get on with being Columns.

This rigidity does however present something of a problem: it’s also quite hard to add anything of any real substance to something so clean and predefined – this is a game that thrives because of its simplicity, not in spite of it, and Sega Ages 2500 insists on bringing something new to the mix. Alter or add to Columns in the wrong way, even in a way that feels quite minor, and it can all fall apart very quickly. It’s like trying to invent a new shape for Tetris – technically you can, and you can do it quite easily, but you never, ever, should.

Perhaps going to be tougher than it looked after all. 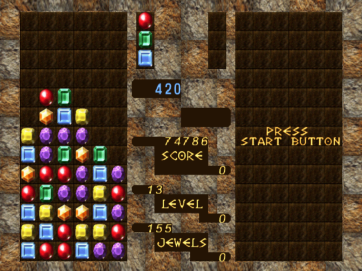 There are three main modes included in Sega Ages 2500 Series Vol.7: Columns: Endless, Vs CPU, and plain old Vs (against another person). Endless then has two further playstyles to choose from – Original Columns and New Columns. Original is essentially a slightly prettied up port of the arcade/Mega Drive release, sharing the same vaguely Greek visual theme and reliably enjoyable gameplay of the 1990 classic, right down to that occasionally life saving edge case of matching colours at the very top of the screen forming a valid combo and then dropping down whatever was left of the incoming trio of crystals.

The redesigned gems used here are close enough to their 16-bit counterparts to feel familiar but I couldn’t honestly say they were better than the pixelled originals, the increased detail oddly  enough causing them to lose their sharp edges and harsh sparkles. Personal preferences aside the shapes and colours do remain clear even when you reach those double-digit levels, so functionally speaking there’s no problem playing with them. The soundtrack backing the gem breaking action is a surer Sega Ages 2500 triumph: delicately remixed, instantly recognisable but also just a little richer too. It’s another set of tracks that like Golden Axe before them make me wish the series had been given a generous amount of space on some sort of compilation album, because these tracks deserve to be heard by everyone.

New Columns’ music deserves even more praise, sounding like what I can only describe as a lost King’s Field sampler. I love it, and I want it in my ears all the time. This mode also includes a helpful “You are *this* far away from your next magic gem drop” meter, but the action in general is rather spoiled by the way the every single re-redesigned gem on the screen constantly spins, whether it’s currently active or politely sitting on the playfield and awaiting your incoming combo. It’s not an unplayably distracting feature and it’s far from the first Columns game to do this (Columns ’97 seems to be the first, and both Hanagumi Taisen games did something similar if less extreme too), but these gem designs rotating in this way… they hinder more than they help. As an aside: the box claims these shiny rocks have been made using beautiful 3D polygons but to my eye they look pre-rendered, which would technically mean they had honestly been made from polygons at some point, but that’s not quite the same as them being real-time 3D – which is how anyone playing a PlayStation 2 game at the time would be most likely to interpret the charmingly “retro” marketing bluster. It reminded me of the hype surrounding Donkey Kong Country at launch – it felt like you couldn’t sneeze without someone saying “silicon graphics“. On a more positive note, this mode dishes out cute little cheers whenever you set off a combo, and I did enjoy this enthusiastic recognition of my often accidental achievements. 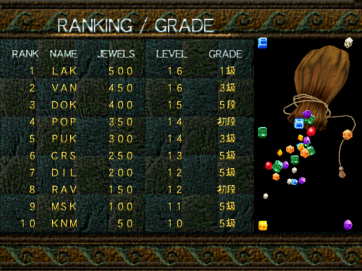 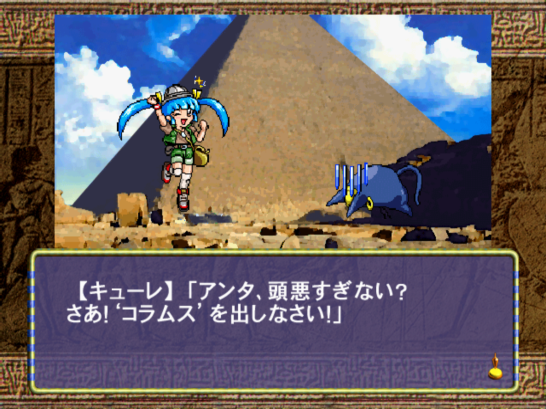 Finally there’s VS mode, which looks and plays a lot (but not exactly) like an upgraded version of the Mega Drive’s Columns III, with an unusual gaggle of Egyptian themed CPU opponents (a 2P version is also available) now given a player character, Kyure (written as Culet in the surprising “Oh wow they actually kept the story” English translation), to fight against.  She’s a lively gem seeking soul and injects the game with some of the much needed personality Columns often lacks and I’m happy to report that this mode really does make the most of her. There are short (and inevitably silly) story scenes to take in before each match, and during play a large window in the middle of the screen shows player and opponent reacting to the game as it goes on, cheering when things go well and visibly worrying when they’re losing. There’s no danger of Puyo Puyo‘s Arle being kicked off her puzzle mascot throne just yet, but it’s a fun little extra that suits the mode well.

The constant presence of another character who’s actively playing against you rather than merely trying to outlast you gives these contests a different rhythm as their successes sometimes raise the floor on your side of the screen, pushing your gems closer to the deadly game-ending space at the top of the field and also as leaving less free space to manoeuvre in general. On hand to combat these attacks is the magic gem system used exclusively in this mode, where a unique set of gems (two “pointy”, one “round”) can either erase one colour (as standard), raise your opponent’s floor or lower your own depending on how you choose to arrange them before they make contact with other gems. It’s a neat tactical addition that offers obvious risks and rewards as well as an uncomplicated and Columns-appropriate way of accessing them.

Bar those spinny gems Vol.7 is another solid if not spectacular addition to the Sega Ages 2500 line up. There’s a simple graphical refresh of the game’s definitive entry, an alternative mode based on later releases, and a drastically revamped version of another strong entry to pick from, virtually guaranteeing that however much or little you hoped to see changed, you’re likely to find a mode to match your tastes in here. It’s not perfect but it’s fun, it feels “respectful” of the games it’s based on, and it definitely fulfils the Sega Ages 2500 brief – it doesn’t feel fair to ask any more of the game than that.

[This series of Sega Ages 2500 articles couldn’t exist without the support I receive through Ko-fi!]