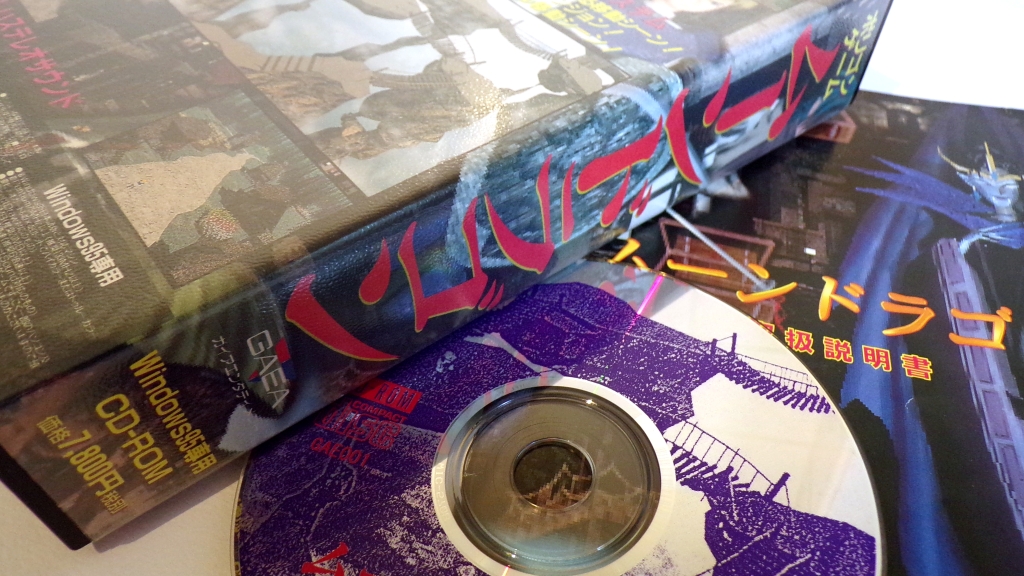 Gaea Entertainment’s Moon Dragon for Windows 95 – as far as I can tell their first and only release – caught my eye thanks to its “My First Photoshop” box art, a cacophonous scrum of dissonant imagery pulled from the game and then haphazardly plastered across the cover. I love it, I really do. Not only does it proudly showcase a very ’90s idea of cutting edge CG graphics, all painted faces and visible joints, but it also shows a lot of heart. This doesn’t look like it was designed by committee, or with one eye on what everyone else was doing, this looks like a collage of someone’s favourite pieces of art all in one place. The box is just happy to show you the cool stuff Gaea made, bless it. 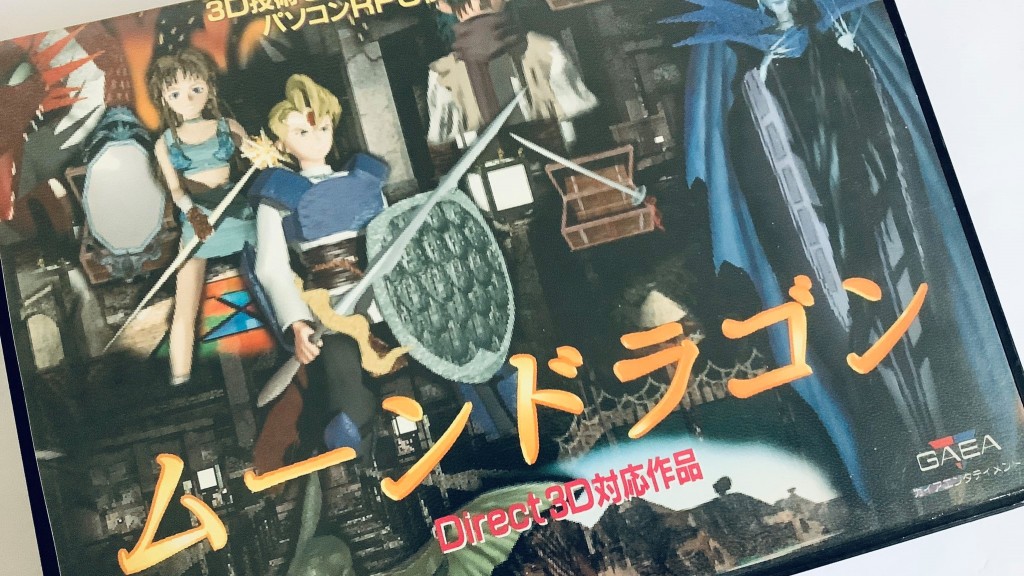 In play Moon Dragon gleefully continues the box’s “I’m just happy to be here” attitude, merrily switching back and forth between various graphical styles depending on the current situation. General area exploration uses a 3D model of one of the two heroes running over a series of empty prerendered backgrounds, each one a strangely pleasant clash of too-flat surfaces, sharp angles, and harsh lighting. Conversations use close-up static images combined with voiced dialogue (subtitles are sadly unavailable). The small island’s overworld map is navigated via a gigantic 3D character stomping over a pancake flat textured floor. Dungeons are nothing but first-person FMV footage, the game only allowing you any control when you reach set junctions, much like The 7th Guest‘s maze area. 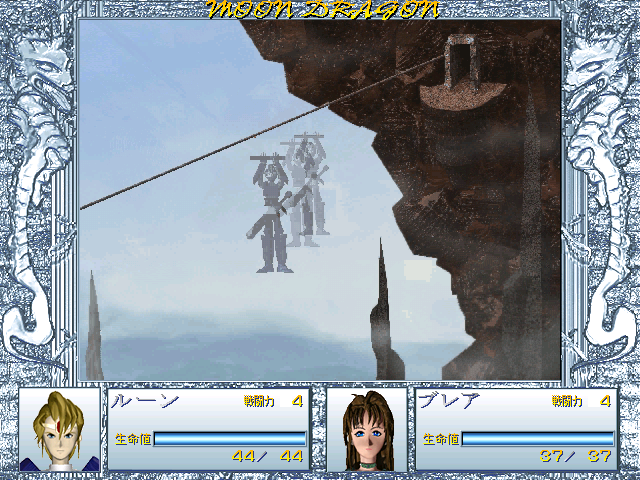 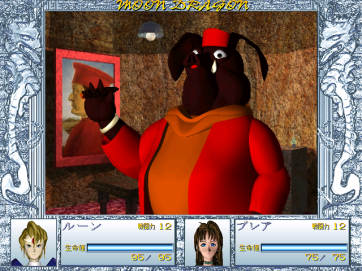 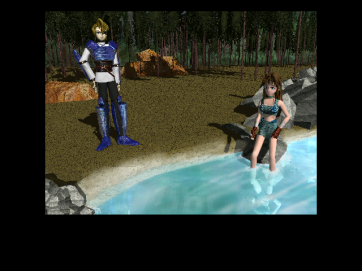 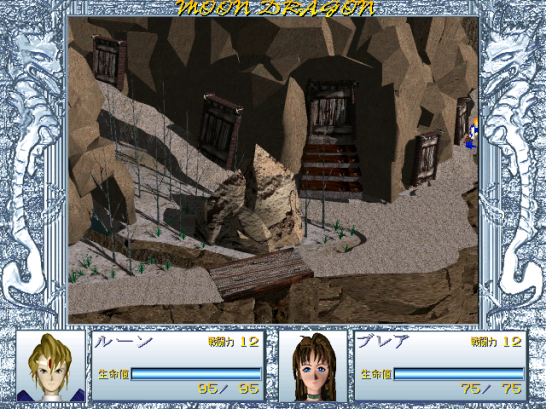 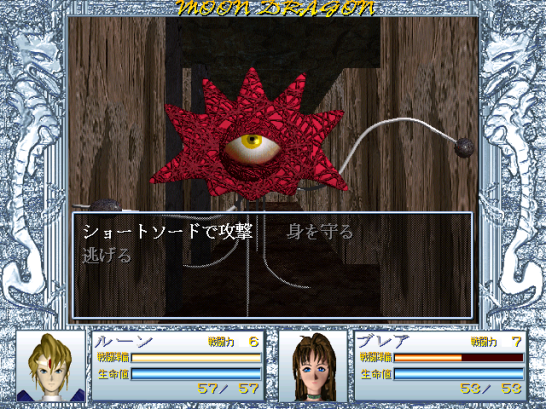 But does this excitable approach to presentation actually work? That kinda depends on how you look at it.

What I can say for certain is that in my youth, Moon Dragon is what I hoped the future of gaming would look like. The (fixed) camera angle changes from one screen to the next, and the mere act of opening a chest prompts a movie to play! That’s amazing, isn’t it? And if I’m honest this is still in many ways what I hope the future of gaming will look like: smooth and shiny with too much detail and not enough all at once. It’s not realistic, but goodness me it’s fun.

Today a style like this is ripe “vibe” fodder, something to be slapped on cheap t-shirts or stolen by “aesthetic” social media accounts, but if we think about it there’s little in here that isn’t also found in a more widely accepted RPG that also debuted in 1997 – Final Fantasy VII. Both regularly bodge together whatever style suits them best in the moment and have a level of real time textural detail never really goes much further than “Hey look, this character has eyes“, but only one of them achieved this look (assuming the credits list is accurate) with thirty-ish members of staff – and fourteen of those were voice actors.

Measured against that intimidating yardstick, Moon Dragon is visually nothing short of phenomenal.

Unfortunately the game tied to those graphics just isn’t up to any era’s standard.

It’s an astonishingly barebones experience, the sort of RPG that helps you appreciate just how forward thinking and feature-rich the original Dragon Quest was. There are just two characters, Rune and Brea, in your party all game long, and they’re apparently looking for their lost dad – don’t worry too much about that particular plot thread though, as Moon Dragon itself seems to forget about it within moments of starting the game.

There’s no gold for this blandly characterised pair to find and no shops for them to spend it in, and what few items they can obtain are either found in dungeons or doled out by NPCs, and most of them seem to be keys. 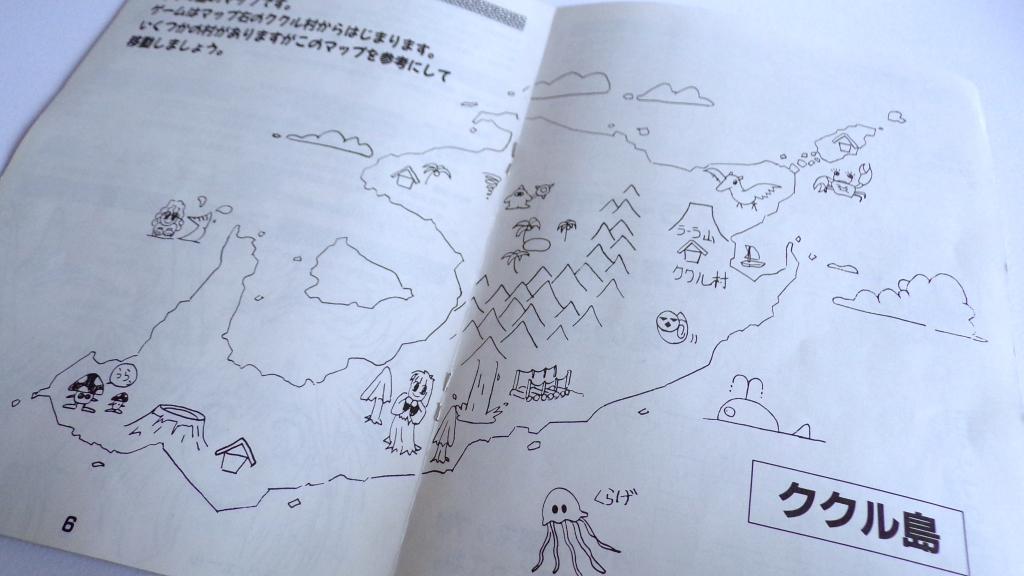 There’s also no MP to use up in Moon Dragon’s wearily frequent random ATB-ish scuffles, all health recovery arising from either guarding in battle or resting anywhere outside a dungeon instead. Other combat spells and skills beyond the absolute basics of attacking, defending, and (hopefully) running away come and go at random each turn – yep, really. I’ve done some testing to see if damage dealt or received makes a difference (ex: if skills are more likely to show up if someone’s taking a beating), or if the deciding factor’s how long the battle’s gone on for, or… anything, really – but I can’t see any logic behind it. Sometimes these abilities pop up after a turn or two and then hang around for a bit, sometimes they take forever to appear and then disappear after a single turn whether you use them or not. I couldn’t even spot any explanation of/apology for this bizarre feature in the too-thin manual either.

In spite of this weirdness, the idea itself is a sound one. Mindlessly spamming a preferred move or a convenient multi-enemy attack is impossible in Moon Dragon, and instead you’re expected to make do with whatever’s available at the time. I wouldn’t say I like the way it’s executed here, but it is more interesting than a static list of very simple commands, which is what this would otherwise be.

Boss battles usually appear out of the blue, each one bearing a not-so-compelling name like “Ghost” or “Skeleton Warrior” and generally having no connection to the location they’re encountered in whatsoever. In keeping with the stripped bare RPGing found throughout the game there is little room for tactical play – you’re either strong enough to defeat them, or you’ve got some old fashioned XP grinding ahead of you. The slight silver lining here is that you can save any time and any where across multiple save slots, so an hour’s worth of mindless random battles can be postponed until a more convenient time. 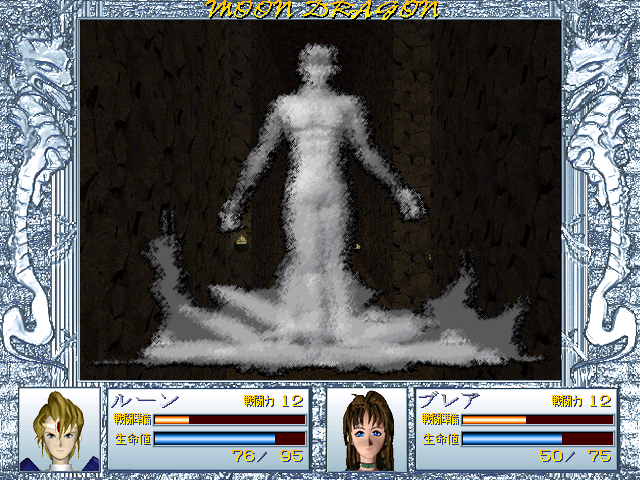 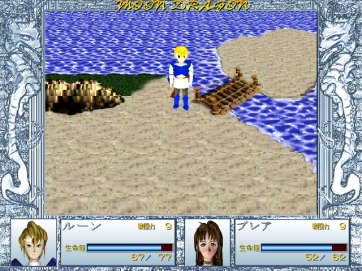 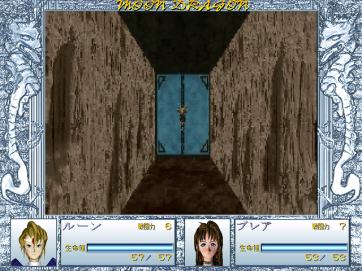 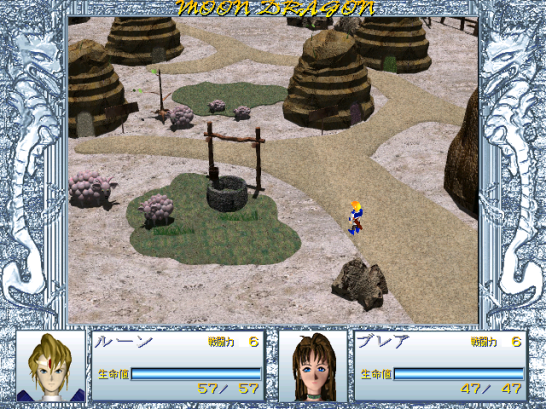 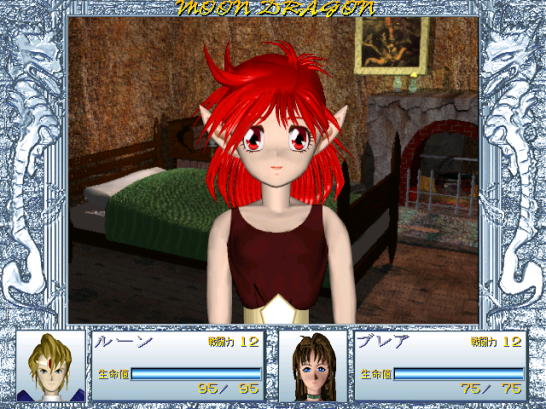 There is always a danger in Moon Dragon that things are tough because you’ve unwittingly gone and done something in the “wrong” order – it’s a very open-ended sort of game, the kind of experience where one village’s most pressing problem can be put to one side while you wander the map and talk to people elsewhere. This degree of freedom often leads to several half-baked plot threads sort-of happening at once with little energy or direction, and so when you find yourself somewhere that looks like an obvious “event” point and nothing happens it’s hard to pinpoint the cause. At least the manual tries to help, providing a rough sketch of the island, a few semi-annotated dungeon maps, and even a neat list of handy hints to go with them, although the impression these give is less of a helping hand for those who might be struggling and more papering over the cracks in Moon Dragon’s woolly game design.

In spite of these issues there’s a tangible earnestness about the game that makes it hard to not cheer it on, and that’s still true even in its lowest moments when I’m trekking back through another dungeon that is technically quite short and yet also feels way too long. It just seems obvious when I’m playing that someone working on this project sincerely thought this was going to be the coolest game ever, that they had a whole heap of ideas swimming around in their head they were thrilled to share with the world. Moon Dragon’s always trying its best, and I sincerely believe it hopes I’m having a good time within its FMV’d halls.

I’m not, but I’ll defend it like it was my own RPG kid brother anyway. Moon Dragon may be weird and wrong, but it’s my kind of weird and wrong. I’ll take a hundred passionate games like this over ten blandly good ones any day of the week.

[This article wouldn’t be here without Ko-fi supporters’ help! Please consider chipping in if you’d like this site to keep going]

5 thoughts on “That dragon came from the moon!”