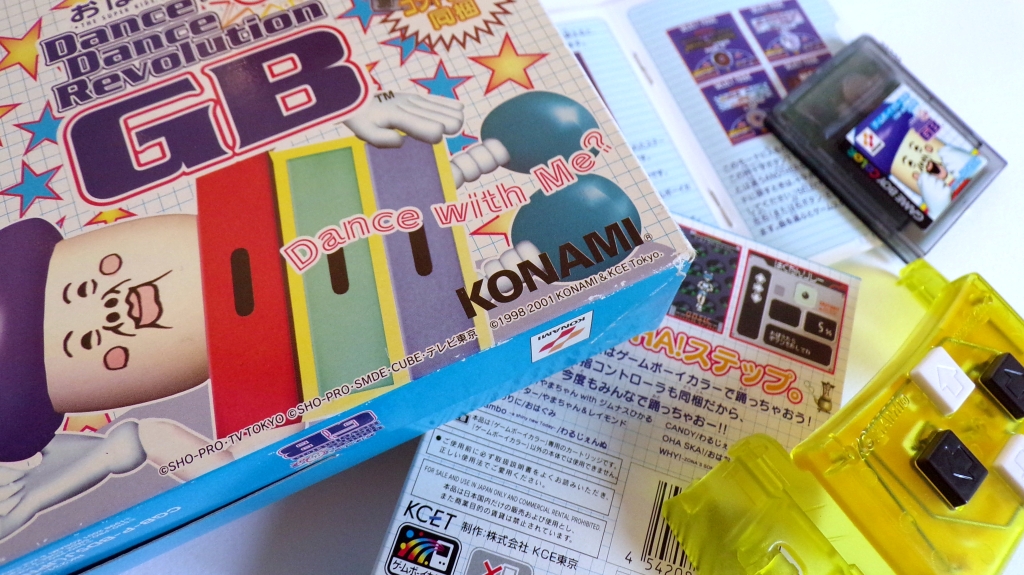 OhaSta Dance Dance Revolution GB is just one of an astonishing five DDR games made for the Game Boy Color, and those are just one part of a wider range of BeatManias and Pop’n Musics Konami made for the same format. That’s not a bad showing at all for a genre that thrives on combining physical interaction with catchy tunes, especially not on a handheld that with the best will in the world wasn’t really designed with music in mind, let alone as a focal point.

The reason for this strange run of success on the unlikeliest of formats soon becomes clear – as strange as it sounds, this is a perfect game for a portable format. A complete run through three songs takes all of five minutes, and free play mode gives you nigh-instant access to every track (although there are only seven – the PlayStation version of OhaSta had twelve). You’re never more than a few button presses away from roughly ninety seconds worth of fuss-free entertainment wherever you are or whatever you’re doing: other GBC games – even some of the system’s very best – can only dream of being as fun and frictionless as this little cart. 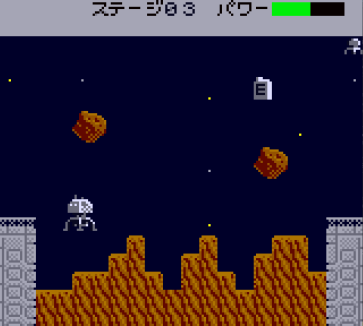 The OhaSta of the title is a Japanese kid’s variety TV show – one that began long before this game came along and is still going today. From what I can gather from the few clips I’ve stumbled upon that aren’t region locked, it seems to be similar to children’s shows on UK TV – live action presenters with the odd special guest, much daftness, and a set containing every colour under the sun turned up to eleven.

Whether you grew up with the show or didn’t know it existed until a paragraph ago, this unexpected origin actually helps the game a lot, even when you’re someone like me who is about as far outside the target audience for OhaSta as is humanely possible. Kids TV demands a certain sort of ear worm-y immediacy and boppy-ness from its music, and this game is happy to deliver enjoyable chiptune renditions of that in spades.

In play Oha-Sta’s very much DDR business as usual: pick a tune and then play close attention to the arrows as they move up the screen, doing your best to hit them perfectly on time as they pass through the markers at the top. As always high scores and rankings encourage repeat play, and three difficulty settings (the hardest of which must be unlocked) keep the challenge going across the game’s small pool of toe-tapping songs.

And for once your toes really are free to move to the music however suits you best, as it’s your fingers that do all the combo-building dancing here. The action can be controlled using any plain old GBC, and when played like this the A and B buttons are mapped to right and up directions respectively (in addition to the obvious d-pad inputs) so those important double arrow moves are still possible. When experienced like this Oha-Star is… fine, and not much else. Add on the official, er, hand dance mat, though and the game is transformed.

his lightweight gadget clips easily into place, the lower screw holes on the back of the GBC serving as both a guide and an anchor – it’s impossible to get this fitting wrong because it won’t audibly snap shut anywhere else, and once it’s on it feels snug and secure. The way it works is purely physical – the buttons on the “mat” prod appropriate parts on the GBC below it when pushed down. Perhaps because of this simplicity the tech (such as it is) never let me down, not even when tapping out quick steps or smoothly finger-jumping across multiple directions, and overall the device feels pleasantly tactile if slightly bulky. Perhaps best of all is how kind it is to the handheld underneath its plastic grip: Even as someone who is perhaps overly fussy about such things I didn’t feel any reason to worry about my GBC, and a careful check of the buttons after an intense session revealed no visible scuffs or scratches. 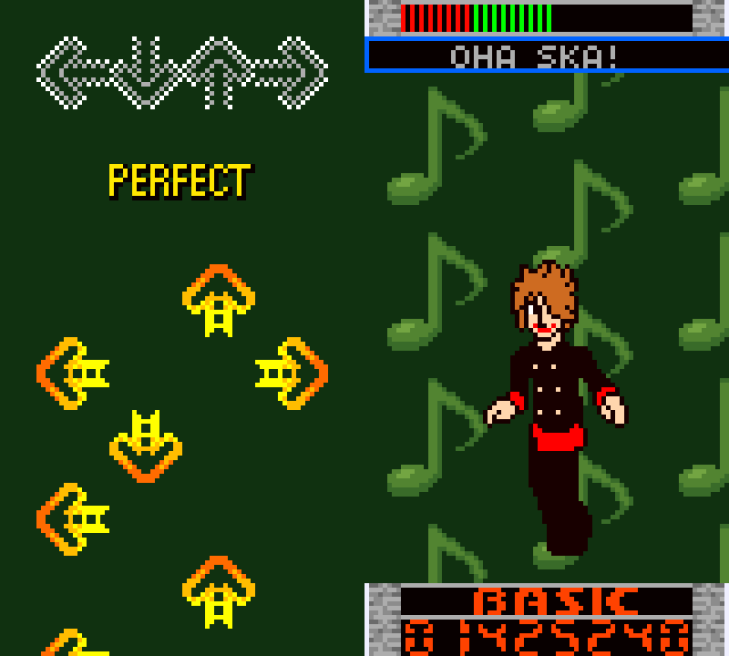 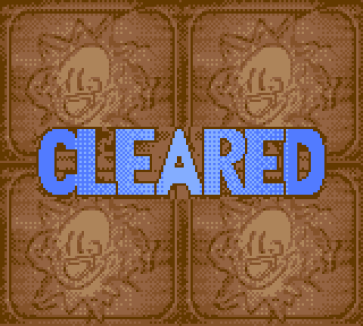 Bored fingers in need of a little variety can spend some time with Oha-Sta’s small selection of minigames. One’s a simple bomb defusal game: a small display shows a string of inputs of increasing complexity, hides them, then whoever’s holding the Game Boy has to input them correctly (and quickly) to try and keep the bomb from exploding. According to the manual the idea is to pass the GBC back and forth between friends every turn so whoever’s holding the handheld when the bomb finally goes off loses, although there’s no reason why you can’t play alone. The other major distraction’s basically Lunar Lander; a game that may be unrelated to DDR in every way but couldn’t be better suited to the cart if it tried as it requires some dexterity, can be played in short bursts (a successful stage lasts seconds), and doesn’t need any inputs that can’t be found on the clip-on dance pad.

The one minigame I can’t say much about is Trading, as this requires two copies of the game, a link cable, and two GBCs to use them with. According to the manual this mode is used to (randomly?) swap what seem to be small art cards with other players. In my inexperience this sounds like a game that sits somewhere between “impossible” and “disappointing”, depending on how many friends you have with a copy of the same game and a willingness to mess around with a minor feature.

Still, it’s an easily ignored misstep in a mostly successful package, a game that will always be a lot of fun regardless of how much the latest licensed theme does or doesn’t mean to you. It’s also a great way to engage with DDR if, like me, age and/or illness have made the full dance mat experience something best left for people with sturdier knees. A dancing game without the dancing should be a complete non-starter, but Konami clearly knew better.

[Ko-fi subs/tips make this work possible – there’d be nothing here without them!]