We may now be eleven volumes in but the Sega Ages 2500 Series is still eager to surprise those that have stuck with it through thick and thin, this disc release of Hokuto no Ken setting itself apart from previous entries by not only offering players the now expected 3D remake of the titular game, but also the Mark III original it’s based on in playable form as well, all wrapped up in a PlayStation 2-friendly way and fully accessible from the moment the console’s turned on.  The emulator is completely feature-free: there are no save states to fall back on or remappable buttons to configure (scanline-effect bars may be expected today but would have been utterly redundant on the CRT-using PlayStation 2), however what’s here works well enough—it feels responsive and the output’s pin sharp, and as far as my eyes can gauge aspect-correct—that in all honesty in this context as an unexpected bonus those extras aren’t especially missed. This is the original game, with all of the additional features the original would have had (all none of them), playable on the PlayStation 2. 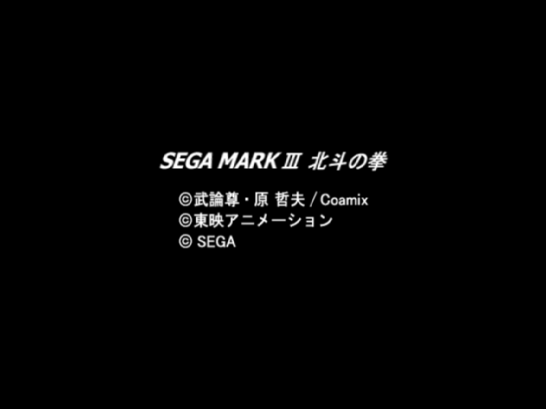 The 1986 version of the game is a side-scrolling beat ’em up broken up by the occasional one-on-one boss battle, and later ended up on the Master System in English with significantly altered graphics under the disappointingly generic name Black Belt. The first thing that hits you (other than an enemy confidently strutting in from either side of the screen) is the staggering amount of parallax scrolling going on in here. I think I counted eight separate layers at one point? I’d be impressed if a game had that now, so to see that happening on a console designed to go toe-to-toe with the NES is just astonishing. Best of all this feature actually serves a useful purpose, giving the early action some eye-catching visual depth to help distract from the fact that punch-provider Kenshiro can only walk left and right on a single pixel-thin plane rather than into and out of the screen, Renegade style.

Kenshiro himself is a relatively tall sprite who can punch, kick, jump, and crouch (the latter ability often forgotten in games like this) and…that’s pretty much everything. I know that sounds several levels below basic by today’s standards—and to be fair this is far from the most complex beat ’em up any of us will ever play—but when we consider the other games released in the same era it becomes obvious that punching and kicking pixel people in the face was still a new and exciting concept that had a long and interesting road ahead of it. At this point in time Yie Ar Kung Fu, in its earliest arcade form, was only about a year and a bit old. International Karate was a few months old at best. Double Dragon didn’t exist. Street Fighter didn’t exist. Combos as we know them didn’t exist. Compared against its peers, Hokuto no Ken is fast, flicker-free, and fun. 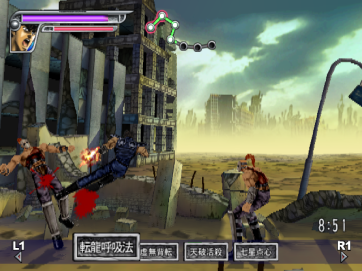 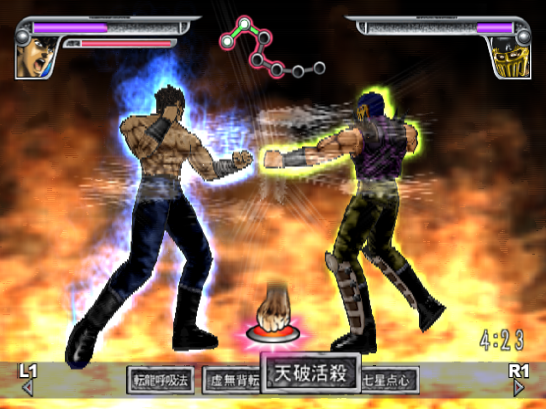 Whatever your thoughts on the original that game’s really nothing more than a sideshow compared to the extensive 3D reimagining contained on the same disc, this new take on Hokuto no Ken perfectly capturing the appeal of the old without losing sight of the fact that this was a game to be played in 2004 (and beyond). The intriguing mix of side scrolling scuffles and static one-on-one fights against more significant characters remain, although this time around the stages are a small arena to walk back and forth in while punching people until they spray blood onto the screen (an effect that secured Hokuto no Ken the red violence/gore cover warning usually reserved for survival horror games) rather than the interminable walks to the right of old.

It’s also much easier to reach either end of a stage too thanks to the new short dash move, which can be used to get out of trouble, get into trouble, or unleash brand new running attacks. There are also two entirely new power up systems to play with as well; a constantly refilling “fighting spirit” bar nestled just below your health bar, and a “special technique” gauge represented appropriately enough by the constellation Ursa Major at the top of the screen. The first can be activated at any time with a quick press of the square button and enables an auto guard ability, keeping you safe from almost everything the game throws at you for a short period of time (although as with many fighting games, “auto guard” and “invincible” are two very different concepts). The second gauge increases only when you dish out or receive damage and is used in conjunction with the special attack icons spread across the bottom of the screen (and switched between via the L1 and R1 buttons), with each special move consuming a different number of stars (indicated by a pink glow on the constellation), with the most powerful attacks naturally using up more of this energy. These features add a little depth but more importantly make it easy for players to engage in some showy Hokuto no Ken combat, bringing the action closer than ever before to the eternally popular manga. 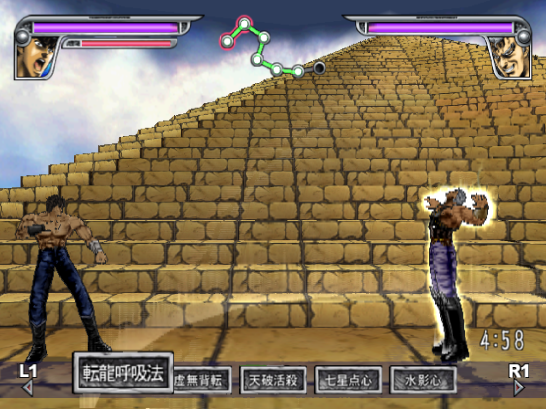 In this reimagined version of the game the fighting is split (unevenly) between Kenshiro, Rei, and Toki, each with their own unique animations, special moves, and (unvoiced) battle quotes. Kenshiro even has multiple costumes… OK so it’s more of a “shirt on/shirt off” situation really, but that’s still one more outfit change than I ever expected a game from the same budget stable that brought us the risible 3D remake of Golden Axe just a few volumes earlier to have.

Breaking up the action are greatly extended (and again, unvoiced) dialogue scenes explaining the transition between each location as well as setting up/concluding the latest fight. Unfortunately this text’s quite frustrating to read as it’s printed painfully slowly on the screen, a feeling that’s only exacerbated by its placement between frenetic bouts where extremely muscular men punch each other at great speed as they glow with mystical energy, and for some unknown reason the only other option is to skip the scene entirely.

Chinwagging gripes aside, Hokuto no Ken is an enjoyable experience that takes no time at all to see through to the end thanks to its easygoing combination of short length, infinite continues, multiple difficulty settings, and welcome ability to save after every chapter. There’s even a reward for your efforts: a simple one-on-one “battle mode”. In this unlockable extra you pick one of the three playable cast members, select a boss character for them to fight against, and then a stage for this epic clash of martial arts masters to take place on. It’s not much, and in all honesty the focus on traditional versus duelling here only highlights the shallowness of the game’s combat, but even so it’s something I’d rather have in there than not. 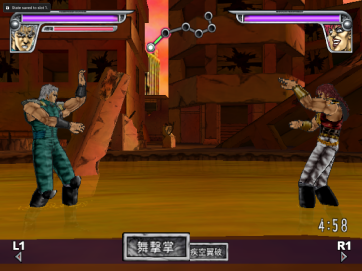 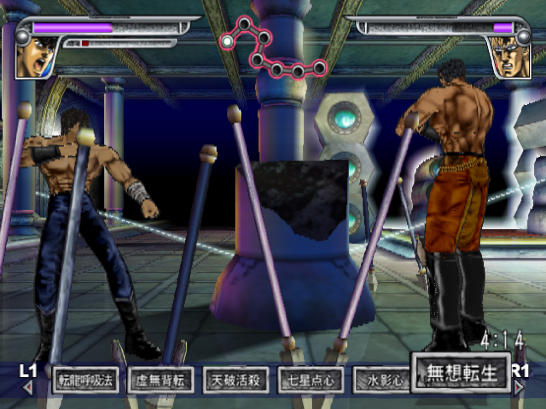 More than anything Hokuto no Ken shows that the teams behind the Sega Ages 2500 Series still had fresh ideas and still wanted to do as much as possible with the little they had been given. There were easily a dozen other in-house Sega games they could’ve worked with that didn’t have an expensive license attached to them—Shining Force, Dynamite Dux, Hang-On, Pengo, and Alex Kidd spring to mind—but they picked this one anyway, in spite of the additional obstacles that decision created. Is there anything more Sega than going all-in on the more difficult option, just because it felt like the right thing to do at the time?

And this is why Hokuto no Ken’s the perfect Sega Ages 2500 game. Who seriously thought something like this could make a comeback at all, never mind receive a full 3D remake (and bundle the original in for good measure)? Nobody, that’s who. This series may be already dead, but when it produces games like this it still shines as brightly as the North Star.

[Ko-fi support made this Sega Ages 2500 series possible! Thank you!]